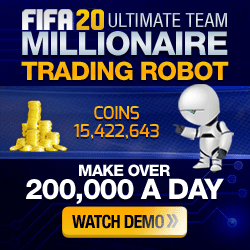 In addition to the GREAT daily tips that the Top 5 Trader in the World is providing us through the FUTMillionaire 20 app, I wanted to show you this quick methods so you have a few more ideas about what you can trade with the FUTMillionaire Autobidder to get close to the 100k coins per day mark without much effort.

First of all, you need to understand that it’s usually far easier to get good deals with bidding rather than buying since there is a lot less competition in bidding, than in sniping, so this email will focus on the Autobidder.

This a strategy that works best around the time SBCs are released in the FUT web app.

The strategy is to go on the SBC page of FUTBIN  and checkout the SBC solutions with cheaper prices for the most popular SBCs.

Since there’s a lot of people checking out FUTBIN for SBC solutions these players will normally sell at buy now for really high prices, as people who are making the SBC usually don’t really take their time and gather their items with bids, they just buy them for whatever price there is on the market.So pick 4-5 players from one of the most popular SBCs and put them on the Autobidder and list them high! I recommend 120% of lowest current buy now.

This works even better if you put your own cheaper SBC solution. If you can do this, most of the players that you used in your solution will become more expensive almost instantly, so be prepared and buy them beforehand.

There is a lot of demand for chemistry styles right now since most people are still building their first teams. This means you can sell them fast and sell them for a lot more coins than usually. As an example, I’ve been trading a cheap but popular chemistry style Engine, and I’ve been getting the cards for 350-400 and selling them at about 800 coins buy now. That’s over doubling my coins with each trade which is pretty great.

There’s also other chemistry styles, so just make sure you choose popular ones like Hunter, Hawk, Anchor, Shadow, Sentinel, Artist, and so on, to make sure you can sell them fast once you list them.

I honestly think right now Chemistry Styles are the most profitable items to trade at this exact moment, since it’s easier to get them with the autobidder, and easy to double your coins selling them almost immediately.

Make sure you have followed the tip of the Top5 FIFA Trader in order to stock up on these. (check the Tips section of the FUTMillionaire App)

The best way to make coins with these is to keep them and sell them during the Weekend League (when everyone is playing), which is usually on Saturday and Sunday afternoon UK time. Around that time you will be able to sell Squad Fitness for 1200+ coins, making a very nice profit.

Ok so here, the trick is to bid on Silver and Bronze cards as well. Don’t just stick to the Gold cards. The reason is simple: usually injuries in FIFA are 1 or 2 games. They are almost never more than 3. So players don’t really have a reason to buy the Gold cards because they are a waste of money.

I’m currently getting a ton of Silver and Bronze cards at super cheap prices like 150 or 200 coins and selling them for 400-500. These sell prices will also increase during the Weekend League as more people are playing.

I hope you can make some coins with these simple tips.

Sign up now for FUTMillionaire here  if you haven’t already and check out our Recommended Players to Trade List as well inside our members area.

What to Trade This Week in FIFA20